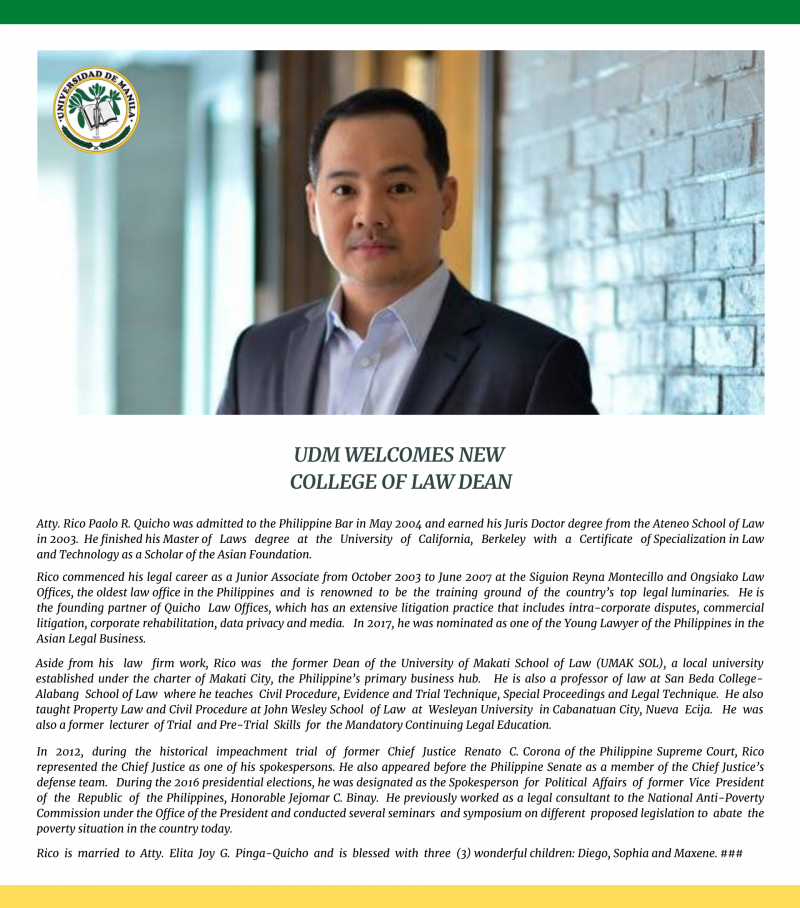 Atty. Rico Paolo Quicho was admitted to the Philippine Bar in May 2004 and earned his Juris Doctor degree from the Ateneo School of Law in 2003. He finished his Master of Laws degree at the University of California, Berkeley with a Certificate of Specialization in Law and Technology as a Scholar of the Asian Foundation.

Rico commenced his legal career as a Junior Associate from October 2003 to June 2007 at the Siguion Reyna Montecillo and Ongsiako Law Offices, the oldest law office in the Philippines and is renowned to be the training ground of the country’s top legal luminaries. He is the founding partner of Quicho Law Offices, which has an extensive litigation practice that includes intra-corporate disputes, commercial litigation, corporate rehabilitation, data privacy and media. In 2017, he was nominated as one of the Young Lawyer of the Philippines in the Asian Legal Business.

Aside from his law firm work, Rico was the former Dean of the University of Makati School of Law (UMAK SOL), a local university established under the charter of Makati City, the Philippine’s primary business hub. He is also a professor of law at San Beda College-Alabang School of Law where he teaches Civil Procedure, Evidence and Trial Technique, Special Proceedings and Legal Technique. He also taught Property Law and Civil Procedure at John Wesley School of Law at Wesleyan University in Cabanatuan City, Nueva Ecija. He was also a former lecturer of Trial and Pre-Trial Skills for the Mandatory Continuing Legal Education.

In 2012, during the historical impeachment trial of former Chief Justice Renato C. Corona of the Philippine Supreme Court, Rico represented the Chief Justice as one of his spokespersons. He also appeared before the Philippine Senate as a member of the Chief Justice’s defense team. During the 2016 presidential elections, he was designated as the Spokesperson for Political Affairs of former Vice President of the Republic of the Philippines, Honorable Jejomar C. Binay. He previously worked as a legal consultant to the National Anti-Poverty Commission under the Office of the President and conducted several seminars and symposium on different proposed legislation to abate the poverty situation in the country today.

Rico is married to Atty. Elita Joy G. Pinga-Quicho and is blessed with three (3) wonderful children: Diego, Sophia and Maxene. ###