As I step down as UDM President, allow me to thank all of you for the expression of support. Your postings reached me and I never expected that. I arrived quietly and I will leave quietly.

Stepping down at this time is not an easy decision since there are still pending tasks that I wanted to do for you and the institution; but step down I must because the support I was promised never came my way in these last eight months. The delays also caused us our HEI institutional recognition which could have been awarded to us last May 2021.

The Mayor met with me three times beginning in 8 June 2019, to convince me to accept his invitation to be UDM president. I seriously thought about it and the opportunity to lend a hand to an individual who sought me in 1998 was a unique chance I can share his personal narrative to you. Yes, I have known Isko Moreno for the past 23 years. It was a cold call made by the then Councilor, introducing himself and inviting me to attend his first privileged speech before the City Council. Since then, he would pop up from time-to-time asking for a meeting, requesting to attend a seminar for free, seeking counsel, briefing on a commissioned survey, among others.

When he invited me, he asked that I reform UDM, clean it and reposition UDM to be a leading light in the City. In one of those meetings, I submitted a proposal to reposition UDM in the path of Education 4.0 and Industry 4.0, creating the programs needed by the City and the country. Hence, we have today courses on data science, cyber security, supply chain management, micro-credentialing, and the certificate courses in heritage tours and barangay governance.

The most important directive was to be of service to and care of the Merlions. I was told that some Merlions were holding on to education as their way out of a dire situation that has defined their existence, while others, the chance to be scholars of the City.

It was not an easy two years. I entered alone and was in fact barred entry to park my vehicle at Gate 2.  I entered the University via Gate 1 but there was no gate at all. Today, there is a main gate, a symbol that tells you, you are entering a University. Leave your baggage outside, to learn.

All the things I learned about UDM were all from self-discovery. No one briefed me, I had to ask. I had to dig and make sense of things. So many questions from Day 1 until I realized I inherited a very dysfunctional, much gamed and badly managed organization. As a political strategist, I thought I was dealing with a political party and not an academia steeped in the traditions of Confucius, Socrates, Aristotle, Plato, Dante, Pascal, Locke, Voltaire, Kant, Wollstonecraft, Rand, de Beauvoir, among others.

So, I rolled up my sleeves and tackled the problems head-on. I kept doing surprise visits to make sure everyone was doing their jobs. I lifted when no one dared and there were days when I wanted to give up but I hanged a painting at my office known as “Dugyot” to remind myself why I am in UDM. I plodded on because of you, my dear Merlions.

The pandemic allowed us to do much more. The disruption led to formulating a Learning Continuity Plan, adapting to UDMoodle and pushing for digitization.  Despite opposition, we stayed the course – no to academic freeze and no to mass promotion. Conducting blended learning was our way to manage the mental health of all Merlions. I am proud of the board passers who dared despite the pandemic.

I wanted to leave an institution that is anchored in the tradition of academia but solid in terms of developing the three (3) stakeholders: students, faculty and alumni.

We had plans that were not implemented for the alumni and non-academic personnel. I hope the next president will consider a grand alumni homecoming to assist in the development of a strong alumni network. I also wished that an employees association can be pursued so that each person who has served UDM in good stead, can have access to a provident fund and all fulltime employees can have a health card apart from Philhealth.

I also wanted to leave a UDM infrastructure, both the main and the downtown campuses, in a much better condition, befitting a University of the capital city of the county. UDM after all is the biggest LUC in NCR and the country. UDM is not a university of leaking ceilings, malfunctioning restrooms, non-existent laboratories, dingy faculty rooms, classrooms without blackboards, gamed services, and more.

I also tried to stop various illegal activities where certain individuals earn from students via uniforms, t-shirts, ties, vests, even student ID cards, xerox services and more. There is a No Collection policy in the University. When faculty asks students to donate, they should secure authority from the Board so all donations must be recorded as property of the University. These were needed to show to all that we are running a University and not a physical market.

We also obligated for two consecutive years the Capital Outlay of the University. Officials of the University cannot just sit idly just because the City Hall does not give what is due UDM. This framework has been serviced out with employees who do not work for the institution shipped out. If and when they come back, I hope the majority will take care of UDM and stand as vanguards for the hard reforms we placed.

Clearly, a fair day’s wage for a fair day’s work should be what public service is.  I am thankful to the Janitorial Services, Security personnel and the Engineering and Maintenance staff who have stepped up in doing their work. I know I leave UDM with these 3 divisions carrying their work to the fullest because they care for UDM.

My vote of confidence to UDM was by investing my personal money to get things done. In the past 24 months I spent my UDM salary as kitty for UDM and much more. I leave with so many holes in my pocket, some expenses were shouldered by my private firm, including equipment but it’s all worth it because I know the expenses redounded to the benefit of the institution, especially the Merlions. We only pass this way once. We do our share for your future. Money can be earned but caring for UDM is needed without much delay, without much fanfare.

In the next few months, you will probably discover the reforms we pursued for the Merlions. Please remember always that UDM is your second home. When you finish, please remain as active alumni. Give thanks to your professors who cared for you and always take care of your parents for they are your first teachers. Merlions, always remember you are resilient. You can win against the pandemic by following health protocols and studying well for your future is on your hands. As we said, “pandemic lang yan, Merlion ka!”

The first time I met the Merlions was on 17 October, 2019 during the kick-off event for the 25th anniversary of UDM at the Mehan Garden. As I said then and I end now, “First, think. Second, dream. Third, believe. And finally, dare.” 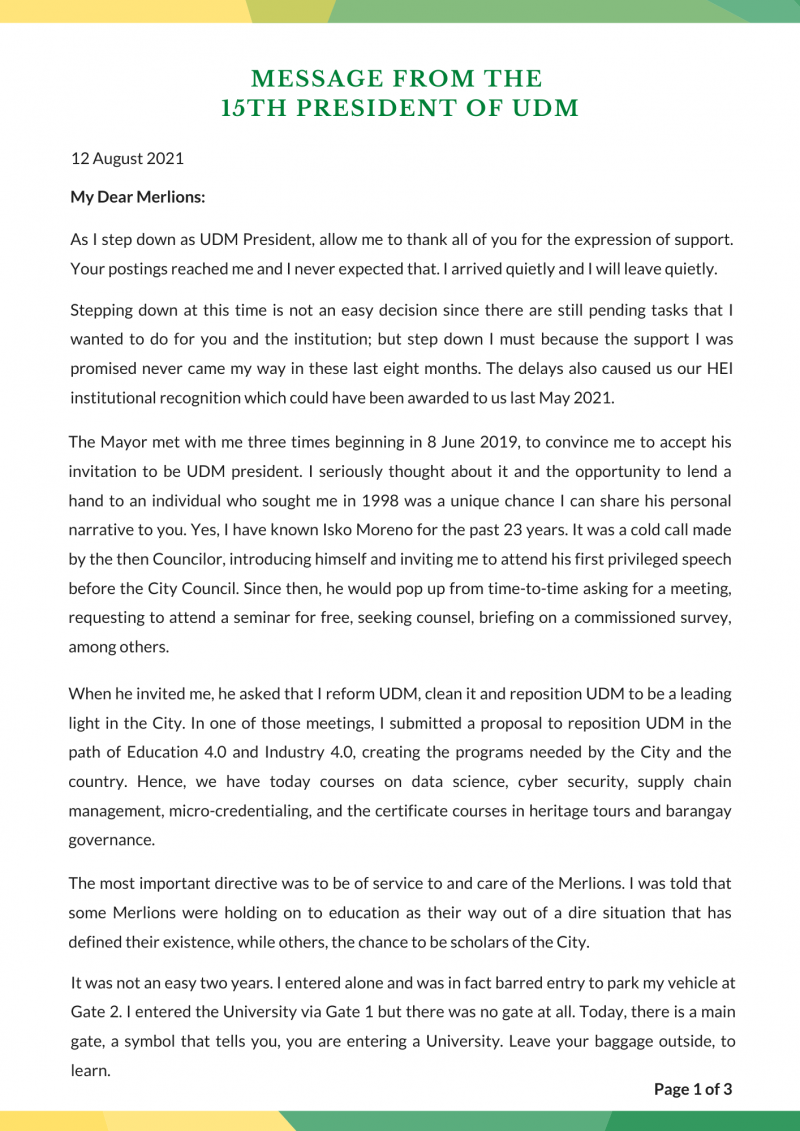 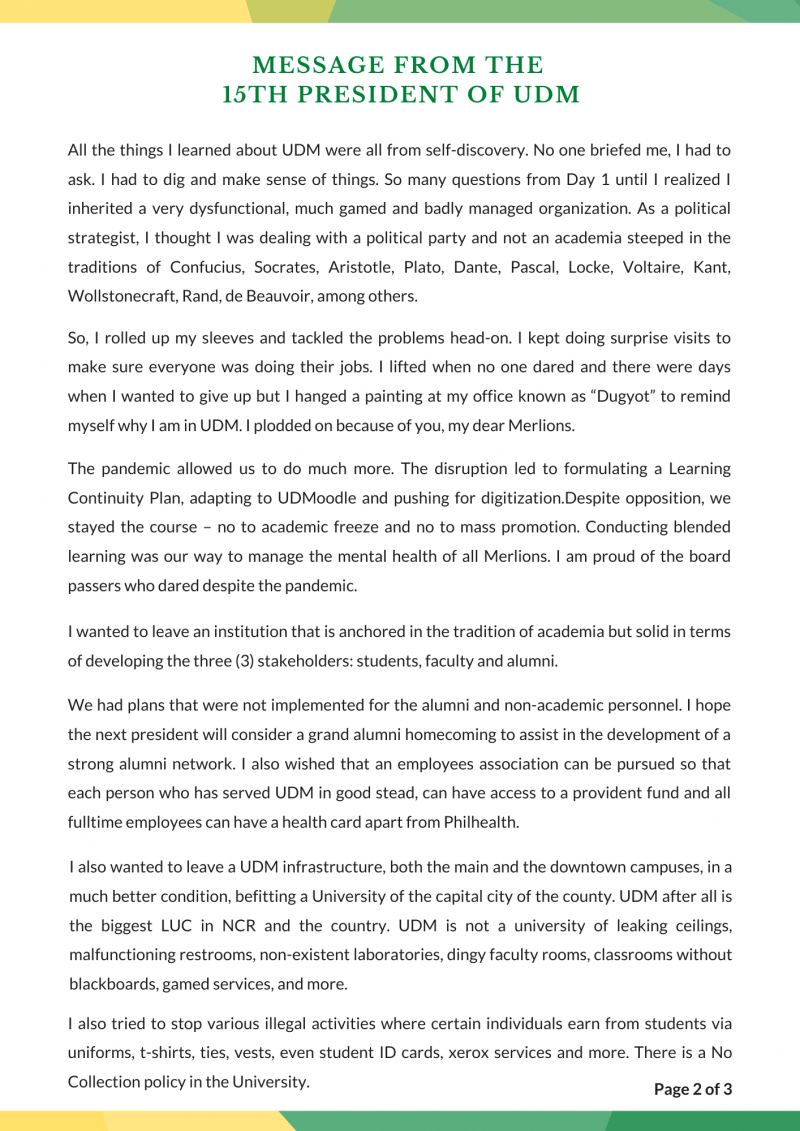